Isn't it amazing what you find in DIY stores? 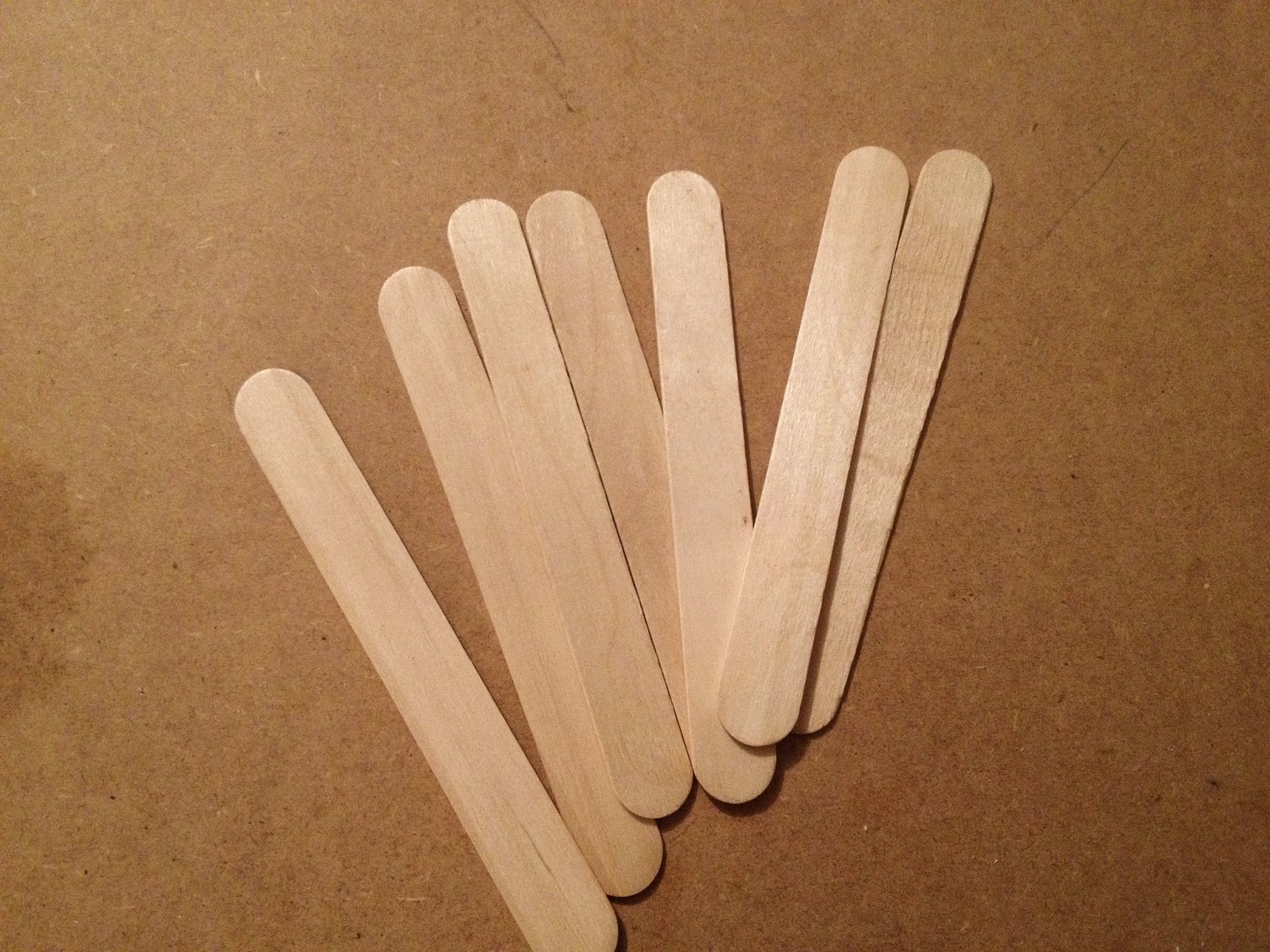 I was wandering through the crafts section of my local Hela the other day, and happened across a pack of wooden spatulas.

"I mean, why would anyone other than a doctor or dentist want a pack of spatulas? Was there a much-feared tonsillitis epidemic that never took off?  "*Hmph* I guess they packaged them up for sale to idiots who ... *embarrassed cough* ... OK, maybe I'll pick up just the one packet ... you never know when they might come in useful."

The spatulas are 15cm long and a bit under 2cm wide. That's close enough to, and might even be, 6" by ¾" in old money, which is probably a medical standard. I had no clear plan of what to do with them, but they did nudge me into having a bash at some woodland for My Mars. I had some "reduced to clear" aquarium plants, picked up a while back, in a very fetching orange/brown colour. No doubt they were remaindered because the colour prompted panic attacks in any fish that swam near them but, be that as it may, I had been at a loss as to how to base them so added them to my "future projects" shelf.

What follows is something of a proof of concept, trying to make woodland that is
1) stable enough not to be knocked over,
2) dense enough to look convincing,
3) sparse enough to get figures in amongst it, and
4) modular so that it can be varied from game to game. 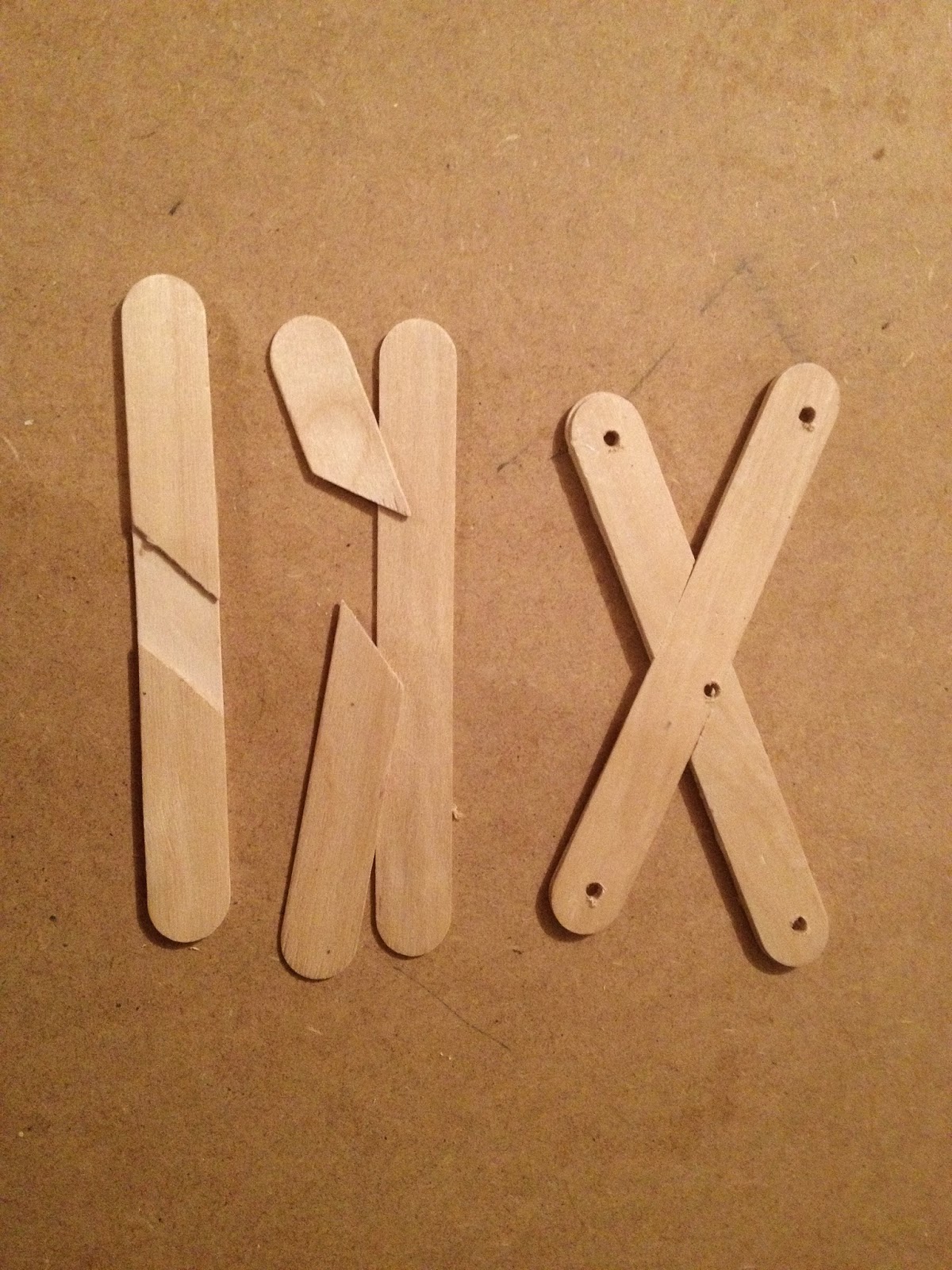 I happened to have my mortice joint cutter guide thingy set up (I'm sure it has a proper name, but I did Latin rather than woodwork at school - audaces fotuna iuvat and all that), so I was able to saw some 45° angles across the spatulas to get them to have a gap that could fit snugly with another spatula cut in a similar fashion. That was the plan, anyway, and it was close enough after a bit of sanding for my rheumy eyes.

This photo shows one whole spatula in the centre with a second with the angles already cut, ready to be glued together. On the left is a cut spatula glued to a whole one, and at the right is an assembled stand (totaling four spatulas, if you've been counting), with guide holes already drilled. I wasn't interested in making the legs even and symmetrical, which certainly made the cutting process simpler.

The gluing (I used normal white glue) was a fairly messy process, and I'm glad I had some clamps to apply pressure while the glue set. However with the double-layering and the angle joints the bases are good and rigid, and unlikely to snap or warp.

While they were setting properly, I set to work on the aquarium plants. separating them from the "stalks"to which they were attached, and trimming the ends so that they would fit the guide holes snugly. Then it was just applying some contact adhesive (or UHU vielzweck-kleber at any rate) and allowing it to set. 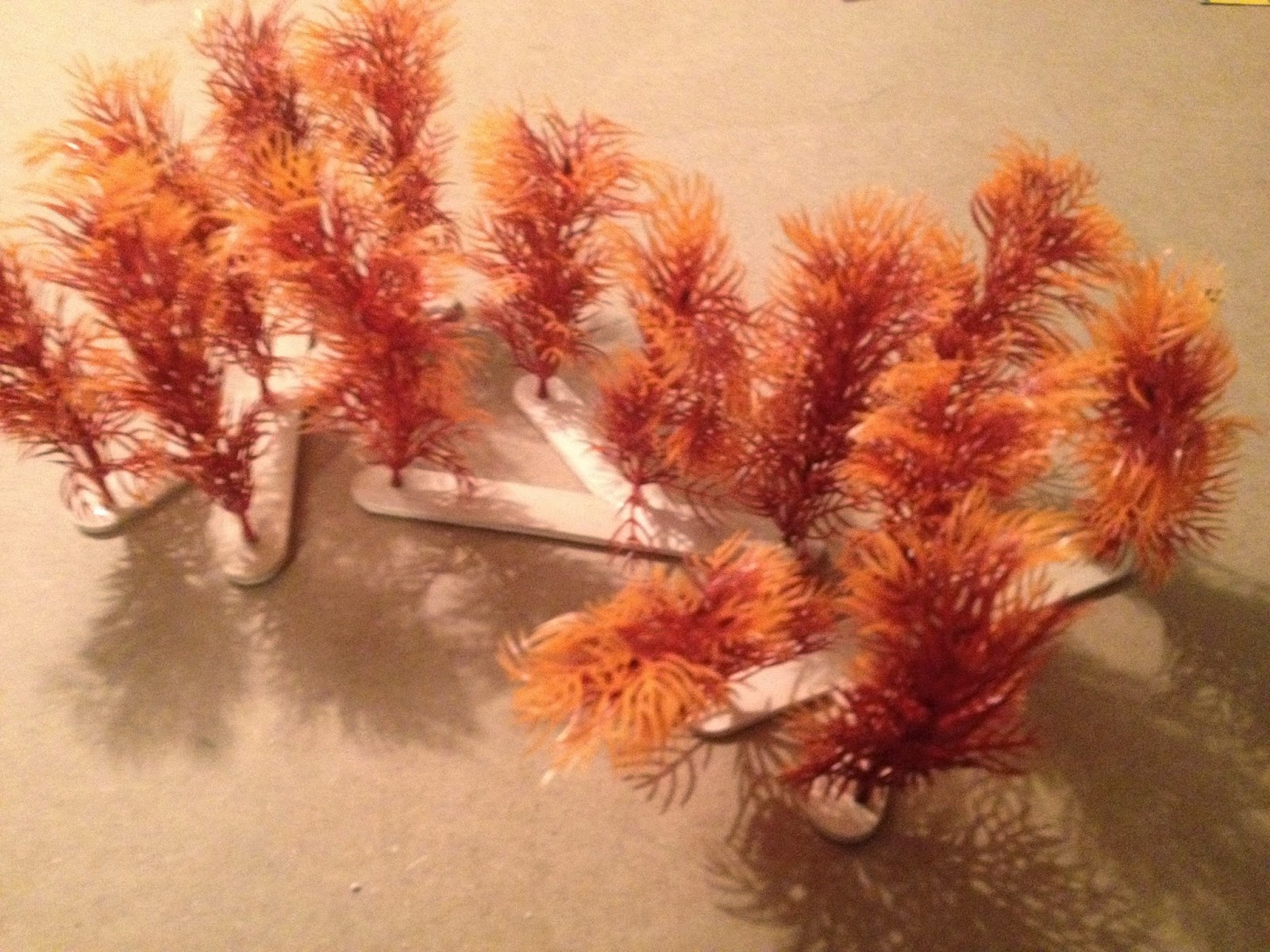 I tried it out with three bases - one of which I made with 3 legs rather than 4 (it's the one in the middle) - and here are the results.

I probably need to add some modelling putty or similar round the base of each trunk for additional strength, and some of the trees could do some warm hairdryer treatment to straighten them. but it's coming together well. 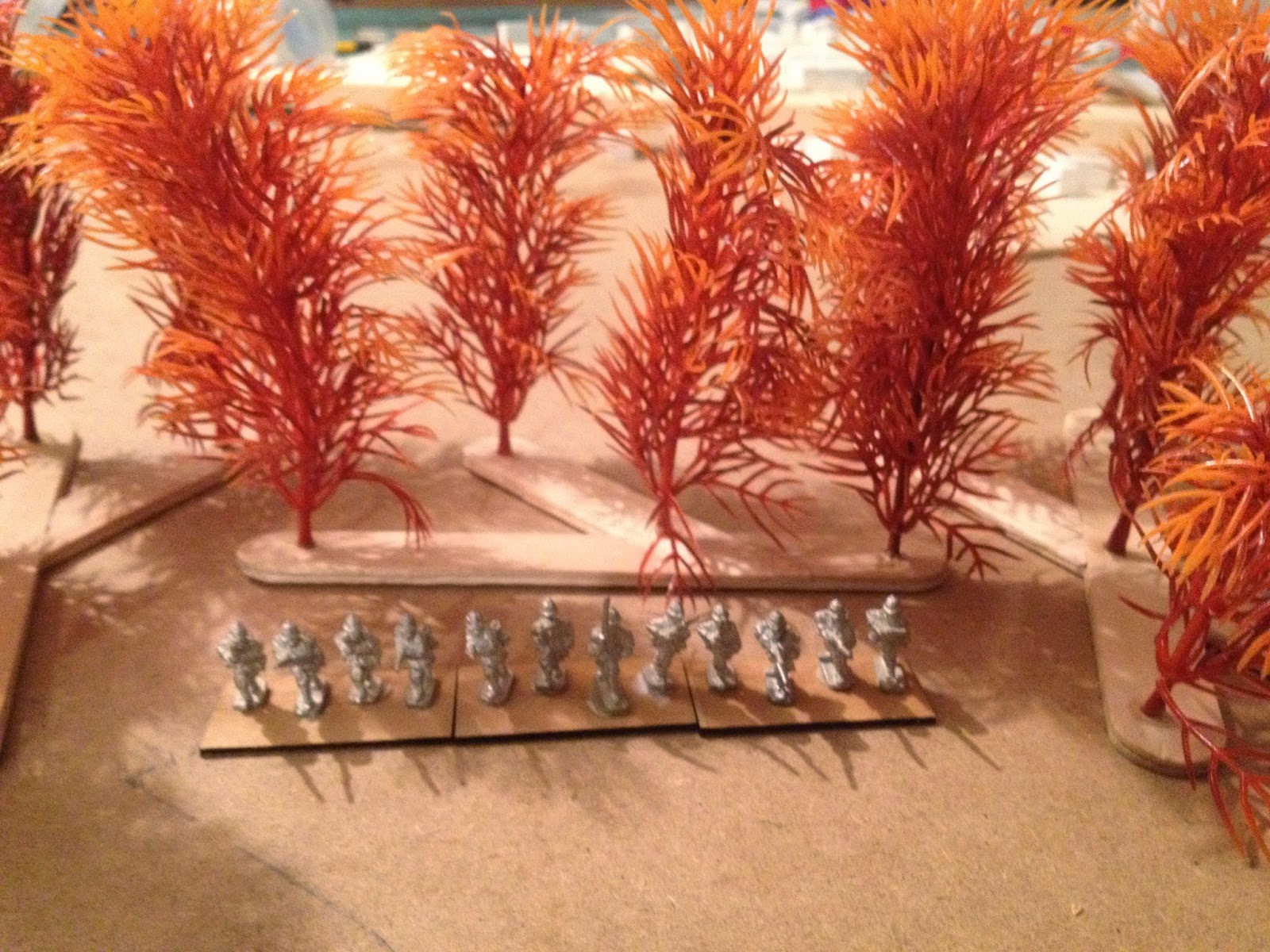 And this photo is with 15mm Peter Pig figures to give you an idea of scale.

Not too shabby, and I think I'm on the right track.

The stands are about 3mm thick when assembled, which happens to tie in nicely with the 3mm mdf (from Warbases in the UK) that I use to base my figures. I need to add a bit more weight to the stands to help anchor them, but some filler/plaster, paint and scenic stones should do the trick.

Overall this was pretty successful, and a good return on my investment of €1.99. (OK, plus the cost of the aquarium plants, but they were bought ages ago - and in a sale - so they don't really count, do they?)

Of course now I have about 40 wooden spatulas looking for a home. Is there anyone out there with a sore throat?

Of course Johnny Martian has somewhere to hide and snipe from now...

Thanks and, indeed ... dashed unsporting, what?

Those look really nice. A novel method, and a good one to share. Thanks for that!

Nice work, and of course red folliage is suitable for a red planet... and makes the red coat the "khaki" of mars...