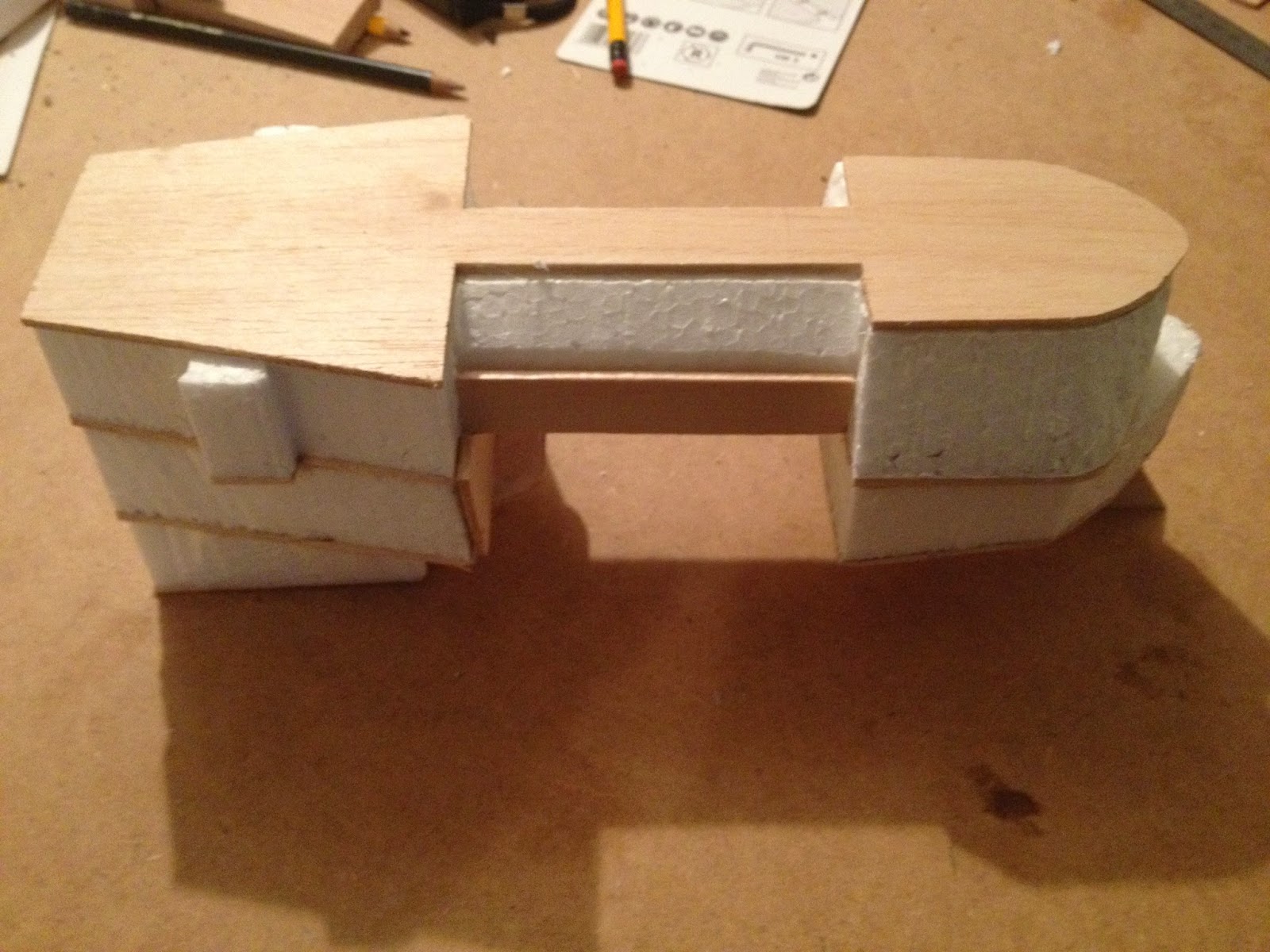 I have managed only a little more progress today. 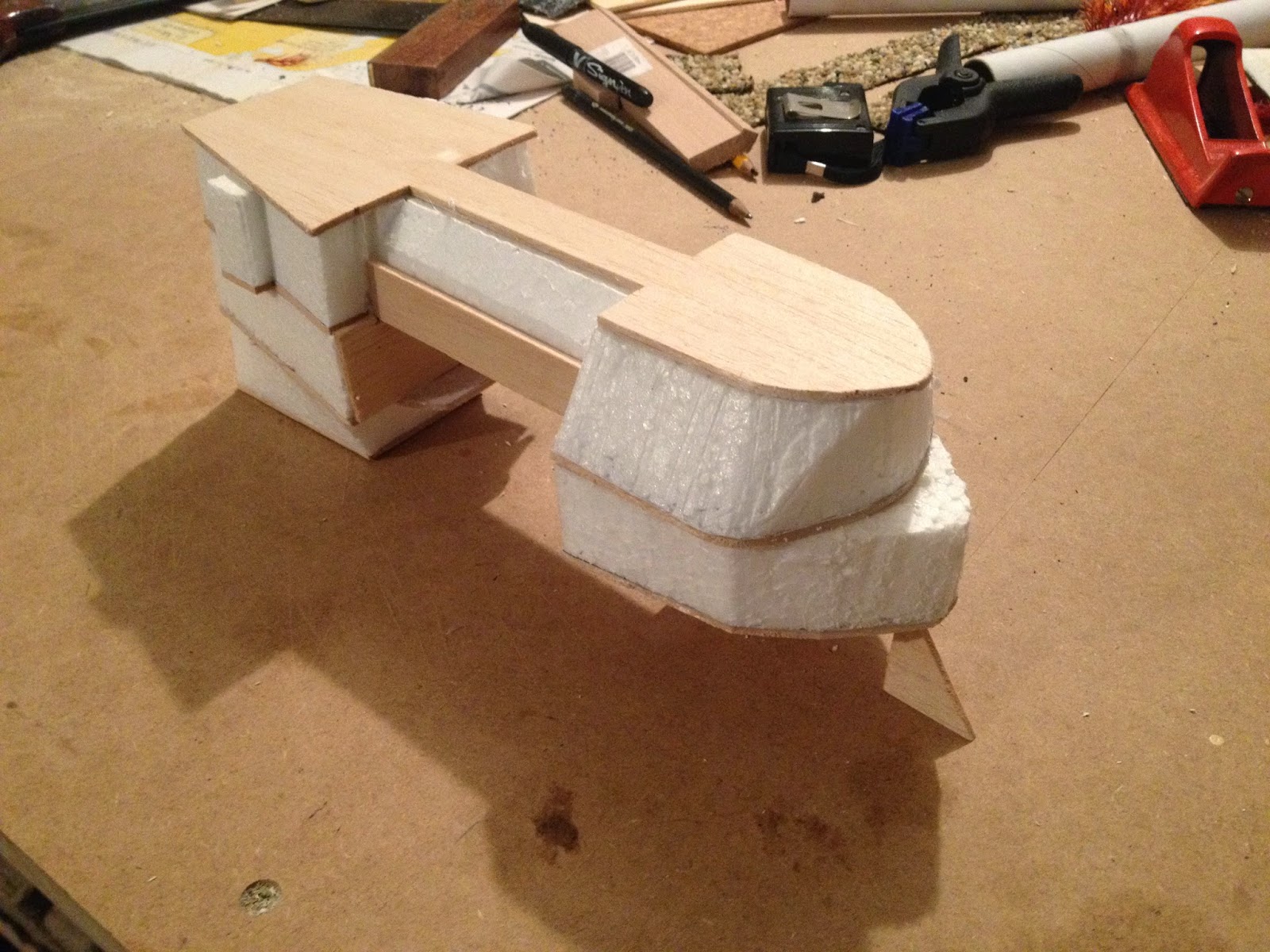 That's the bits of the hull in one piece, with a triangle of balsa at the front to prop it up.

As you can see, I've smoothed off the top of the bow with a hot wire.

I glued some balsa strips half a deck-height to the lower deck, and then hot-wired the remaining angle of polystyrene away. That gets the same look as in the Sky Galleons illustrations. 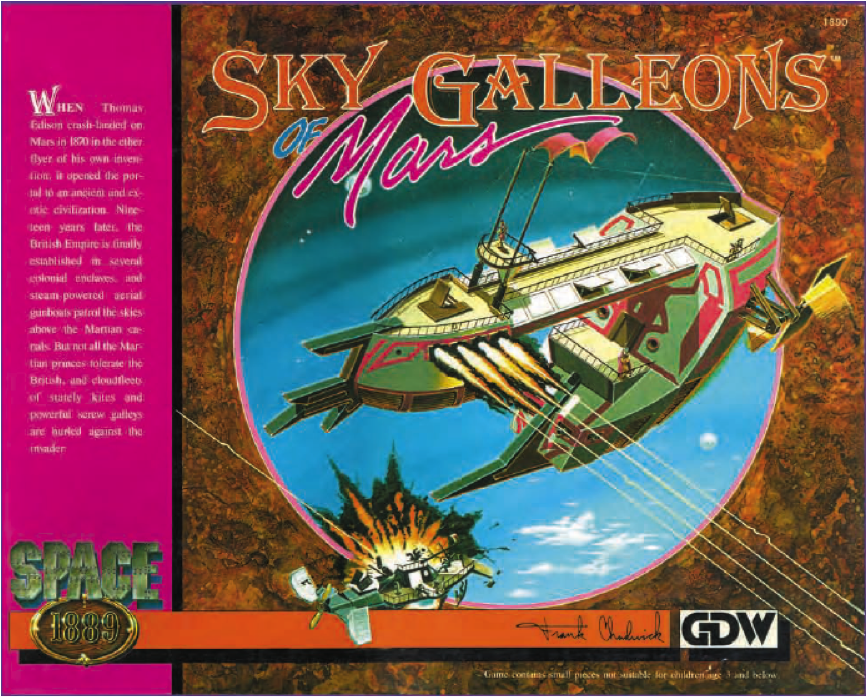 The bow probably needs some more bulk to be added before adding a ram, but it's taking shape nicely.

It will need only a little more work to imitate the window openings - I guess it gets hot in there turning that crank!


However I am very aware that several problems are building up, so it's time to pause and note the lessons so far from this learning experience.

The Lessons, or "What I'll do differently next time around"

In no particular order:

1) lining up the various decks was a nightmare and, with hindsight, not done accurately enough. Part of the problem was that, in trimming the expanded polystyrene, it is just too easy to have the hot wire at slightly the wrong angle and slice too much off. Then the deck thicknesses aren't quite square, so you're lining them up by eye to get the best-looking fit - and that's not a good idea with my eyesight. This will now require some significant (and messy) sanding and filling to get things square - I'll wait for decent weather for that and do it outside - it's going to be messy! The panelling will cover it, of course, but it's probably a long way round for a shortcut and the rest of my fleet should really be built more efficiently.

2) Next time I might well consider placing balsa on the top and bottom of the layer of polystyrene (or foam) for the lower decks. If I can get these properly aligned then I'll have a much better match deck-to-deck - AND the hot wire trimming would be nice and square. Pushing pins through the polystyrene to line up the balsa wood might help with this.

3) Care will be needed with the weight of the ram. The basic build of the craft is very light, so I'll have to avoid a heavy ram if at all possible or the whole thing is going to get very unstable. It's probably going to be a compromise between solidity and weight - too much weight will raise the centre of gravity and pull it well forward at the same time. Both are bad ideas. I might make the rear keel a bit larger to add a counterweight, but there are limits. In my mind this is the knottiest problem I have to solve. I may try laminating thin balsa wood - hopefully by crossing the grain and soaking the white glue through it will make it robust whilst still fairly light.

4) I really should have planned in the flying stand before I started, and build it in as I went along. Polystyrene doesn't take a drill very well. I mean, it REALLY doesn't.

5) The more I work with the polystyrene, the more I think that using a heavier foam makes better sense. This should compress a lot less than expanded polystyrene, and will be a better anchor for propeller housings and the flying stands. I'm toying with the idea of using bbq skewers thrust through the hull to act as anchors for the prop housings, but I'm not confident that the current construction will be sufficiently robust to hold them firmly in place. Time will tell.


So, bottom line, I need to pause for thought and solve some of these problems before going further - the ram, keel and flying stand in particular. I suspect the ship will be a bit scrappy in the end, but it's been a good test so far and it will be interesting to see how to firmly attach propellors.

Wish I had some better advice, but sometimes a rest and regroup is the best solution, thanks for the update (and press on!).

No worries, it's not dead, just restin'!

I will get there. Two steps forward, one back; reculer pour mieux sauter, and all that.

Looks like a good start to me, can't wait to see it finished.

Thanks; it's only a few teething problems to be sorted out now. The basic method of using each deck plan as a layer to build the shape of craft seems to work well. I may have to use more robust materials for future versions, but that's a detail.