"A jingal or gingall, (Hindi janjal) is a type of gun, usually a light piece mounted on a swivel; it sometimes takes the form of a heavy musket fired from a rest."

Here's how I'm making the "form of a heavy musket fired from a rest" as will be used by my Martians.  As always I'm using the Black Hat imperial martians.


Raw materials: Figure firing from shoulder; pavise (from the imperial martian guard pack); a 28mm martian musket I picked up a while back from Bob Charette's Parroom Station range (two on a sprue); some skin and/or blood*
*optional but inevitable

Here are the bits I used: 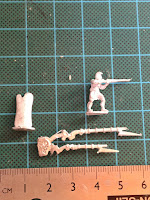 First I trimmed back the stock and bayonet to make the jingal. I then hacked the musket off the figure, and "carefully" opened up a gap between right arm and body to accept the stock.  (That's where the blood donation came in.  Again.) 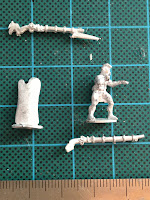 One of the two muskets is probably a bit short, so I'll see if it can be used for something else - perhaps an organ-gun or something.  It'll go off to the bits box for the moment.

Then assemble, with appropriate filing to fit, and mount on base with two other figures to maintain the 3-infantry-to-a-base ratio: 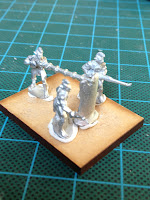 I'm hoping that the pavise will help to secure and stabilise the figure.  I could have attempted a bipod/tripod, but the pavises weren't going to be used for anything else (and you get 8 in a packet for "free" with the Guards), so why sweat it?  It looks good, and I even get to use a handgun figure as a loader!
Posted by Clive G at 14:55

Nice conversion, and I think the pavise looks excellent with the jingal gunner.

Do you intend having unit or city heraldry on the face of the pavise? As a thought, you could also have small flags or pennants attached to the pavise to make a bit of a show of the large unit base.

Kobold,
I haven't thought that far, but very interesting ideas. I'll have to be careful not to overburden the stands with too much to carry though! What I may do is have two of the stands with jingals and the other two with just 3 other figures - a mixture of muskets, shotguns, swords/pistols. These troops are intended to skirmish ahead of the main body and disrupt enemy formations - analogous to Chinese Tigermen in many ways - so banners to be waved may well come into to it (as would various pyrotechnics).

I've been toying with converting some old 25mm Jingals left over from a Boxer project some years ago - you've inspired me to sally forth.

Pleased to be of service/disservice, sir!

My Guards actually use their pavises, but these are dandy, sir!