I'm using Black Hat figures for my Martians.  It's a nice range; well-detailed and quite diverse.  You can find them here.

So far so good.  I'll be using the non-guard troops as the mainstay of the army, and I need a mixture of muskets and pole arms. There are no polearm figures for the non-guard troops, and the packaging of the gun troops poses some problems.  Here's a pic of the contents:

As you can see three of the eight in the packet are armed with handguns, and I don't need handguns.  However I can use these handgun figures by converting them into polearm figures.  A bit of brass wire, a plasticard blade, et voila - here are before/after pictures: 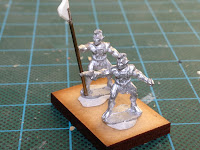 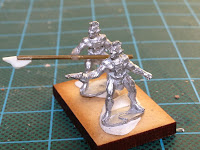 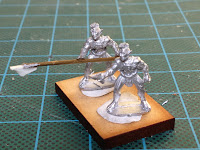 My guns  and polearms are in a ratio of about 2:1, so I can use pretty much all of the figures. Being a Scot I hate wasting money on figures I can't use, so I'm glad I can use them pretty effectively.

They rank up pretty well, and hopefully the polearms will be fairly robust.  I'll probably replace the alloy polearms on the Imperial Guard figures with wire ones in due course.