It's been a while, what with the real world taking its toll, and being distracted by the Boxer Rebellion.  But I have been tinkering with shield gunners, that trademark Oenotrian troop-type from Soldiers Companion, and I see no reason why other city states won't have borrowed the idea.

So here's what I have managed so far.

The raw materials are just a Martian Imperial Guard Halberdier - one with the halberd held close to horizontal should work best - plus a pavise from the Imperial Guard with guns. 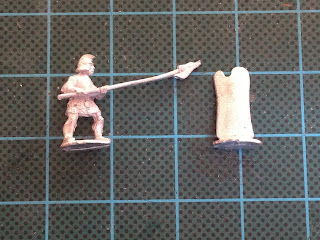 I trimmed the halberd a few mm forward of the left hand, to allow the "shotgun" to project through the shield a bit.  I also bent the end of the halberd down to suggest a shotgun stock.  I then chopped and filed the pavise down a bit, and drilled out a hole slightly off-centre to take the shotgun. 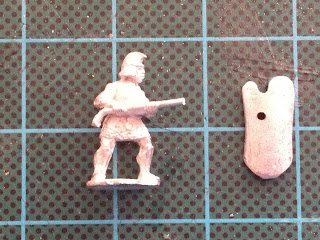 And that's pretty well it.  Between the left forearm and the "barrel" you've got a pretty good surface area to glue the shield on, and here are three based up.  I think that the notch in the pavise/shield works nicely for the look. 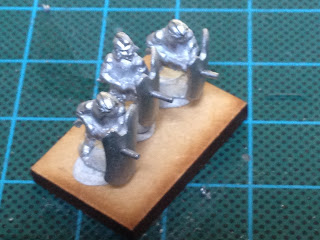 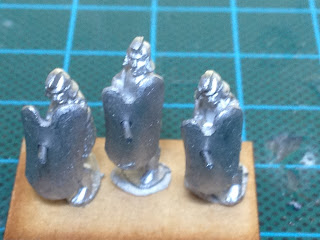 Not too bad for 5 minutes work really, although I may add a shield strap if I'm feeling adventurous. I also have to decide out how to deploy them.  I may mix them with my halberdiers, as shield guns are essentially close combat weapons.

We've been playing with massing a Legions shield gunners as "converged" shock troops. The tactic shows some promise - though a tempting basket of eggs as far as the Royal Artillery is concerned.

For Piquet I think I'll keep them with my halberdiers for the moment - akin to the 2-handed swordsmen or sword-and-buckler men with a pike formation, using their shieldguns to break up the enemy formation, and making it easier meat for their colleagues. So probably a further UP1 for melee, plus the ability to melee infantry in the open without a Melee Resolution card. That would give the unit a significant advantage against non-guard halberdiers, and also gives them a high level of aggression against other infantry, reflecting their tactical role of blowing holes in the enemy at close quarters.

Under SC I suspect your tactics might work a treat, even if they're only acting as a decoy :-)

Damnation, but that's brilliant! and so obvious, too! Why has no one thought of this before? Yep, Mark Severin is getting an order as soon as I get back from Historicon.

(Damn, I should have negotiated a percentage!)