Gashants or Octosaurs?  Of course as  a fan of Space: 1889 there isn't really a choice to be made.  My problem, rather, is how to amass a herd of gashants in 15mm. 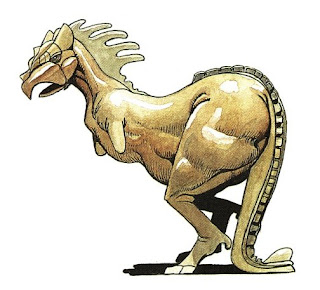 Rodrick Campbell over at Highlander Studios Inc does some lovely ones.  That's it.  Period.  I haven't yet spotted any bipedal dinos that might do service with a little work, so Highlander is the only game in town!  Unfortunately for me, they cost US$ 10 per pack of four gashants with tack and harness.  I really don't begrudge him the money - as I say they really do look good - but by the time I pay import duty they'll cost more than twice as much as a pack of 4 Black Hat octosaurs (£3 per pack, and that includes riders).  That's not even looking at postage across the pond versus across the channel. (Did I mention that I am Scottish?)  And I want lots of them - more that 60 easily.  Plus artillery draughts (probably).  So I really need a different solution.


Given that I already have the Black Hat octosaurs, I really should look at ways to convert them without it becoming too much of a chore. 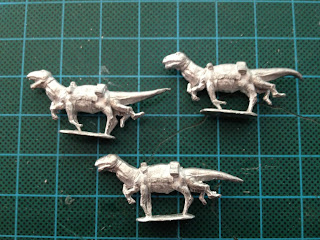 Here are the three variants of octosaurs in the Black Hat range:

First impressions in term of work needed to convert them are that ...
- The posture of the octosaur is much more horizontal than that of a gashant
- The larger pair of rear legs on the model are very vertical.  Gashant legs are much more digitgrade in shape, and bunched under the torso nearer the centre of gravity
- Octosaurs have four appendages too many - but the small forelegs look good for a gashant conversion
- The octosaur's head is wrong - it needs to be more bird-like
- The neck and tail should have frills
- The tail might be a little heavy, and not long enough
- Gashants have really enormous thighs and rear ends.  And I mean HUGE.  (Weightwatchers should branch out and sell plans for the reduction of gashants' thighs and bums!)


Anyway, that's quite a long work list, although the first two are probably the most serious issues.  Change the angle of the torso, and the rider's sitting position changes too, leading to MORE conversion.  I suppose that might tie in with the green stuff that will be used to increase the bulk of the haunches.  And if I have to rebuild the legs, how stable will the casting be once complete?

I'll work on this over the next few weeks and see if converting is really feasible with the limited time and skills that I have.

Clive, if you need a bunch, send me an email and I'll do a volume discount for you.

Thanks for the steer - I hadn't seen these before. I suspect they are on the small size, being 15mm mounts for what look like Ewoks (not that they or I could possibly use that term for copyright reasons).

Black Hat also have dino-bird type mounts in their 18mm Lizardmen range, but again these are on the small side, with lizardmen looking over the mounts' heads.

All other steers welcome, and even if they don't suit my tastes they may work for someone else!

Rodrick, thanks for the offer and I'll certainly be in contact.